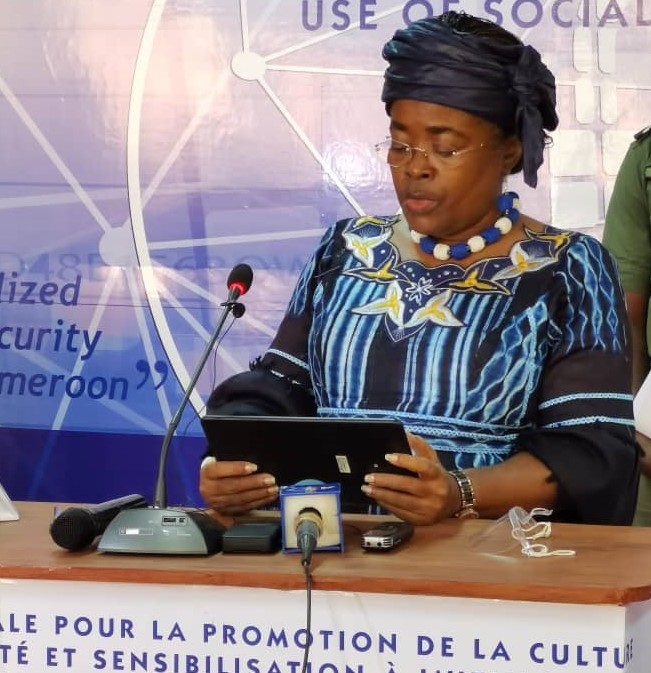 A promise made, a promise kept. The members of the Silicon mountain community - Buea received a one (1) year free high-speed internet connectivity from the Government through the Minister of Posts and Telecommunications.
This was a promise made to these young start-ups entrepreneurs by Minister Minette Libom Li Likeng during an exchange with the start-ups last year June in Buea while Launching the National Campaign to promote cybersecurity and raise awareness on the responsible use of social media.
The promise was honoured across an official activation ceremony presided over by the Minpostel boss through videoconferencing. The event which equally held in the Amphitheatre of the SUP'PTIC Buea branch under the coordination of the Technical adviser No 1 of Minpostel, Dr. MFUH Windfred, saw each participating startup receiving from the hands of the Regional Delegate of Minpostel for the South West Mr. Mouliom Nchouwat Raymond, one of the following two broadband packages: 1) Fibre to the Office (FTTO): 06 Mbps of unlimited Internet, calls to fixed and mobiles lines and Digital TV Channels, every month for one year, 2) LTE Broadband: 135 Gigabits of high-speed Internet every month for a period of one year via LTE Modem.
According to the Minister, the request for this facility could not be ruled out given that a high-speed internet connection is the basic raw material for an ICT innovator.
She continued by urging the young digital entrepreneurs to use the resources in enhancing their output and fight against cybercrimes, thereby, joining in the national coalition for the civic and responsible use of ICTs in Cameroon with the ultimate goal of promoting the culture of peace and the harmonious socio-economic development of the country.
The Minister went further to remind them of the on going 3rd edition of the ICT innovation week running from the 14 - 18 of March, 2022, placed under the theme: "Cybersecurity and Digital Innovation: What Challenges for Cameroonian youth?". The event which plays host to two main competitions ie, the competition for the best ICT project of the year, and the digital challenge for admission to in-house incubation at the Cameroon Digital Innovation Centre has only come to reiterate the Government's determination to accompany startups in the digital field for a rapid digital transformation of the country.
She seized the opportunity to inform them of the already functioning Cameroon Digital Innovation Centre (C-DIC), which is a leading hands-on digital
entrepreneurial training and research centre that will provide the right ecosystem to drive innovation and to incubate digital projects for the emergence of a truly local ICT industry and the development of "made in Cameroon" solutions and applications. This centre with an outstanding characteristic of a multipurpose and multilateral platform she pressed on, will serve as a facility for strengthening, optimising and creating businesses by young people through several programmes, thereby creating job opportunities.
Another good news she brought to this community was that of Buea having been chosen as the first site to host an annex of C-DIC.
In a motivated and thankful spirit over a fulfilled promise and a series of other promises made by Minister Minette Libom Li Likeng, the spokesperson of the startups of the Silicon mountain, Mr. Churchill affirmed that these gestures have only come to cement the relationship between the Government and the Silicon mountain - Buea.
FaLang translation system by Faboba
Register for free