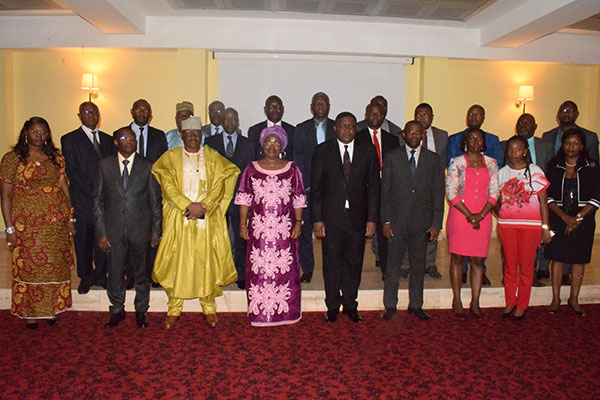 Members of the Steering committee of the Cameroon component of the Central African Backbone (CAB) project recently assembled at Djeuga palace in Yaoundé to draw up the 2019 work plan and validate the corresponding budget.

This activity took place during their 7th ordinary session, presided over by the Minister of Posts and Telecommunications, Chairperson of the committee.

During this February 27 session held behind closed doors, members of the committee also deliberated on the level of implementation of the objectives of this all important project whose deadline for completion is December 2019.

The CAB project which consists of a regional and country component is aimed at drastically reducing the cost of telecommunications and ICT services in the central African sub-region. It will also go a long way to create jobs and increase the productivity of businesses, thereby alleviating poverty in the sub-region.

Mr. Denis Ngae, Senior Telecommunications Engineer and Director at MINPOSTEL is a Resource Person for the CAB project in the Ministry. Here is his comment on the intricacies of this ambitious project:

CC: What is the CAB Project all about?

Denis Ngae (Steering Committee Member- MINPOSTEL): The Central African Backbone (CAB) project is an initiative of the Heads of State of countries in the central African sub region who during their 2007 Summit expressed their strong will to interconnect countries of the sub-region through the creation of a solid optical fibre network. This backbone of fibre optics is aimed at facilitating communication among the countries and rendering the cost of communication relatively affordable.

In order to effectively execute this very important project, Cameroon just like the other countries concerned created a Steering Committee with the Minister of Posts and Telecommunications as President and the Minister of Communication as Vice President.

What has been done so far within the framework of this project?

Denis Ngae (Steering Committee Member- MINPOSTEL): It is important to note that before 2015, the project’s activities in Cameroon were sponsored by the World Bank and during this phase, varied prior studies were carried out. These include: a study on Interconnection across the Border with countries in the sub-region, another study that led to the repositioning of CAMTEL our main service provider, the elaboration of regulatory texts that are in synch with current technological innovations, studies on the establishment of electronic counters.

The second phase of the project now sponsored by the African Development Bank entails the actual interconnection by a network of more than 1000km of fibre optics connecting the countries of the sub-region and Nigeria.

What are the main activities contained in the 2019 work plan adopted by Steering committee member during the 7th session held on February 27, 2019?

Denis Ngae (Steering Committee Member- MINPOSTEL):  It is most definitely the flagship activity of this second phase of the project, which is the actual installation of the optical fibre network required for the effective interconnection of the countries concerned. This activity actually started some months ago but the installations made so far are not yet operational.

Concretely, we have to construct community access points in localities affected by the installations made. We also intend to accompany centres for women in the areas concerned as they strive to enable women benefit from the optical fibre network.

Could you comment on the level of execution of the CAB project?

Denis Ngae (Steering Committee Member- MINPOSTEL): Based on the reports submitted by the execution agent of the project, all partners (like CAMPOST, CAMTEL and other administrative authorities) are actively involved in the implementation of the objectives of this all important project. So far all is well but for the fact that we are still on the lookout for project managers who will enable the optical fibre installations to actually swing to operation.

What are the major challenges slowing down the completion of the project?

Denis Ngae (Steering Committee Member- MINPOSTEL): One major challenge we are facing right now is the compensation of the population affected by the activities of this project. However, the compensation decrees have been submitted for validation and signature.  Basically, once this is sorted and project managers officially assigned, we can confidently say the project is well on its way to completion.