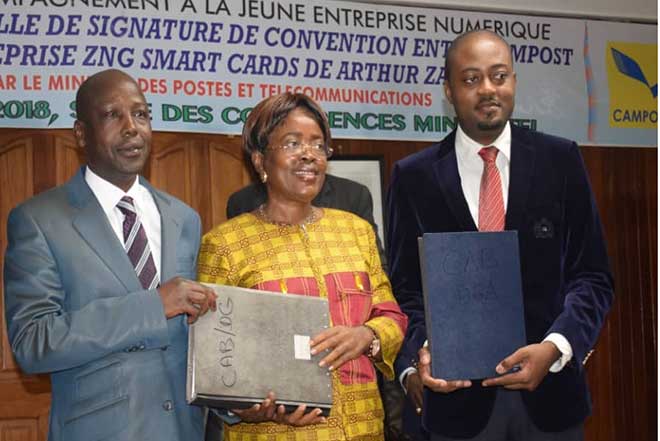 The Minister of Posts and Telecommunications presided over the Signing Ceremony of the Partnership Agreement between CAMPOST and ZNG Smart Cards Factory- producer of the ZCard for digital payments.

Cameroon Postal Services (CAMPOST) and ZNG Smart Cards Factory entered a historic partnership for the promotion, marketing and distribution of a new digital payment device, the ZCard and its electronic terminal, on Monday 17 September 2018, in the Conference Hall of the Ministry of Posts and Telecommunications (MINPOSTEL).

Created by Cameroon’s thriving ICT entrepreneur, Arthur Zang, the ZCard is a smart card that enables secure and traceable digital payment for marketable goods and services through an electronic terminal. Promoted by Mr. Zang’s four – year old ZNG Smart Cards Factory, the ZCard project has so far benefitted from partnership with government institutions like the Investment Promotion Agency (API) and the Ministry of Mines, Industry and Technological Development (MINMIDT).

In his speech at the Contract Signing Ceremony, the innovator, Arthur Zang said that this partnership with CAMPOST is quite timely and promising as they enter the distribution phase of the project. “In order for the ZCard to be made available to users throughout the national territory, we need a reliable and widerange distribution network, and who else other than CAMPOST can render such services?...” Arthur Zang mentioned.

In her address at the Contract Signing Ceremony, Minister Minette Libom Li Likeng, quoting the Head of State, showered praises on the young entrepreneur - Arthur Zang and his team for making Cameroon very proud through their giant strides in the technological sector. “In this regard, I wish to hail our young compatriots who have distinguished themselves lately through major innovations which are acknowledged by all. They took bold initiatives in the highly competitive domain of new information technologies and in many other domains such as agriculture.

They were not afraid. They were daring. Such has always been my recommendation to you. They were able to weather the deficiencies in our country which is still in the building process and they have achieved the excellent results which we can all be proud of”. (President Paul Biya’s Address to the youths, February 10, 2016).

The Minister explained that the CAMPOST/ ZNG Smart Cards Factory Partnership will make CAMPOST through its dense network of 234 post offices, a viable distribution hub for the ZCards, and this will offer the Cameroonian post a key role in the country’s transition towards digital payment. She further said the ZCard project and this important partnership agreement will not only contribute immensely to the development of the digital economy but will create new jobs and encourage young people with brilliant initiatives to step forward and make their mark like Arthur Zang and his team.

The Posts and Telecommunications boss assured the brilliant and daring entrepreneur as well as prospective project holders of the unflinching support of her Ministry towards such initiatives, as this falls in line with Government’s zeal and mission to promote young ICT entrepreneurs, contained in the Digital Economy Strategy Plan for a digital Cameroon by the 2020 threshold.

The ZCards and electronic terminals, now available at F.Cfa 2500 and F.Cfa 18000 respectively, can be used by just any interested person for prompt, secure, traceable and cash free transactions like the purchase of marketable goods and payment for public transport services. The ZCards are produced by the Yaoundé – based ZNG Smart Cards Factory which can produce about 5000 cards a day. Arthur Zang believes that the ZCard project and this new partnership with CAMPOST will create employment and promote research, innovation and technological development in Cameroon. 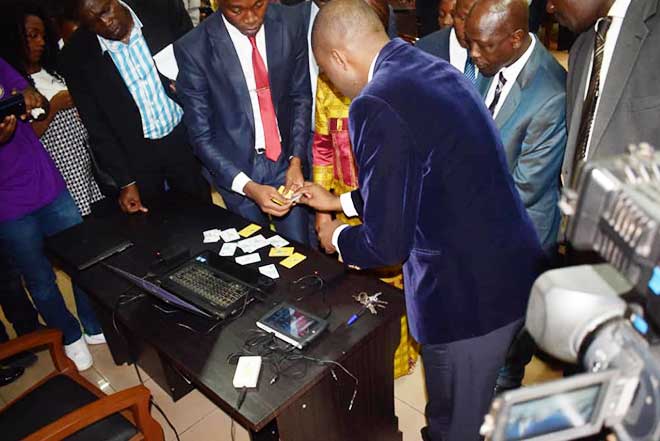